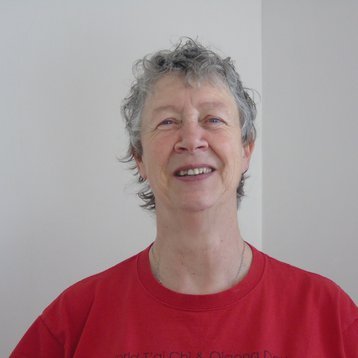 I was introduced to Yang style tai chi by 2 local instructors, Edwin Tolputt in 1999 and Martina Marie-Luise Paulinus in 2000. After years gaining a good foundation and as a keen student I was encouraged to take part in advanced Yang style training which gave me the confidence to train with Master John Ding.

I made two visits to China with Master Ding to work with numerous Yang masters to improve my skills. Meeting with Grandmaster Yang Zhen Guo was a real highlight. I studied Traditional Chinese Medicine in more depth and qualified as a Medical Qigong Therapist in 2005, then qualified through ICHM as a Senior Yang style instructor in 2006.

However, it was not until 2008 that I began my training with Grandmaster Liming Yue and in 2009 it was a delight to train with Grandmaster Chen Zheng Lei. Over the years I have gained experience of Health & Breathing exercises, Silk reeling, Wu Qin Xi, Ba Duan Jin and Liu Zi Jue Qigong forms, Chen 11 Forms, Chen 18 Form, Loa Jia Form parts 1 & 2, Chen Push Hands, Chen 11 and Chen 16 Fan forms, Chen Sabre form, Pear Blossom Spear form and Chen Straight Sword form. Additionally, in 2014 I began training with Master Faye Yip working on Yang 24 Form and the Kungfu Fan Form. Experience has also been gained in Yang 18 Fan Form and the Beautiful Sunset Fan Form.

In 2012 I qualified as a 3rd level Chen style Tai Chi and Qigong Instructor. In the summers of 2012, 2013 and 2014 I was lucky enough to return to China with Grandmaster Yue and have also attended Internatial Seminars in Scotland, Germany and Italy during this period, where I was able to gain more experience of Chen style Tai Chi, various Qigong Forms, weapons training and also an introduction to Xin Jia. In 2014 I was honoured to be accepted as a Senior Indoor Student of Grandmaster Yue.

Currently No Events Advertised For Pamela